The part that still does not make sense to me is what the developer and owner were actually afraid of.  Even if we were to find George Washington’s dentures buried on the lot, there is no law or ordinance that would have prevented them from building there.

I was the one who voluntarily offered to sign a non-disclosure agreement so that any findings would not be revealed until after construction was completed.  You would think that would satisfy the developer and his attorney. But instead they countered with multiple agreements that amounted to a gag order–a lifetime ban on ever discussing what was found without the consent of the developer.  That fact alone shows that they in fact knew the fort was there but wanted to make sure know one else would.

The fact is we were not treated in a honest and straightforward manner.  The owner, Martin Zelnik, claimed in the Riverdale Press that:

“If it’s just a question of getting publicity or being able to photograph something for documentation, I don’t have a problem with that,” he said. “It was never raised with me. If they wanted a photograph an arrowhead if they found one, God bless them. I’m all for historic preservation.”

“I thought (the agreement) was fine,” Zelnik said. “But the next thing I know, he’s going to the newspapers making claims that I’m totally unaware of.”

I found it incredibly dishonest on Mr. Zelnik’s part to say in the press that he is “all for” allowing a dig for “publicity” and that photography would be okay with him.  The documents sent to us by the developer’s attorney expressly forbade the very things he said he was “all for” and he was a designated signatory on the agreement. They sent us agreements saying one thing and then said something totally different in the paper.

This is the provision on the agreement that stated that we could be prohibited from publicizing the dig and that photography would not be permitted:

This is Zelnik’s signature line on the Non Disclosure Agreement: 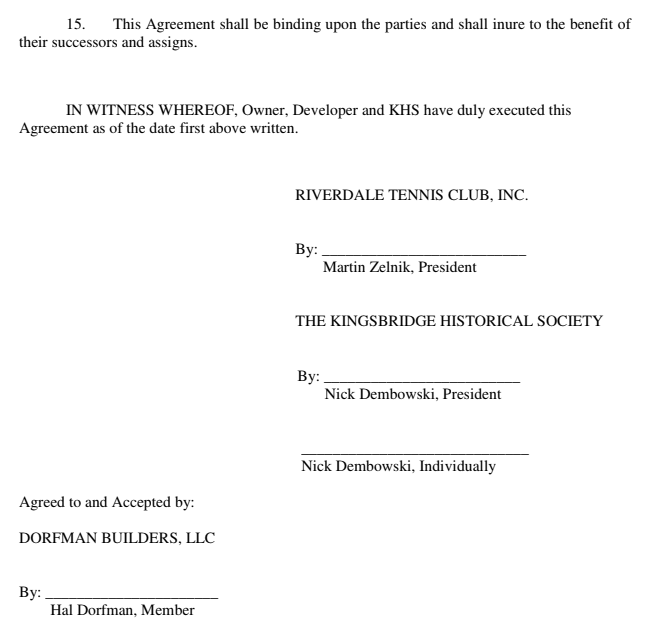