Thanks for the info.  Definitely good to have a copy of the Riverdale Historic District document.  As for the house, I have to say it sure beats a lot of the McMansions that were recently built in Fieldston–and what a view!  Anyone want to buy it and donate it to the KHS as a new headquarters?

J.B. James’ memoir includes information on another old house in the area:

There was also a very old farm house on the extreme southwest corner of the land, now the grounds of the Colored Orphan Asylum, which was run for many years by a Mr. Whitney as a boarding house. This was also destroyed. It may have been the original Ackerman house, but I think it was the old Warner house.

If JB James remembers this old house, there is chance a photo of it could be found.  And if it was the original Warner house, it would be very old indeed.  Who was Warner?  There were generations of Warners that owned a great deal of property in this part of Riverdale.  But before they owned the land, they were tenant farmers renting the land from Frederick Philipse as this part of Riverdale was part of Philipsburg Manor, which stretched from here to the Croton River.  John Warner was a capable Patriot militia officer during the Revolution.  He served as 2nd Lieutenant and later as Captain of the South Yonkers company of militia that hailed from this neighborhood.  He was from the 3rd generation of Warners to live in the neighborhood. His father William and Grandfather Charles both farmed this same spot.  After the Revolution, Frederick Philipse’s property was seized by the state and the Warners purchased the farms that they once rented. 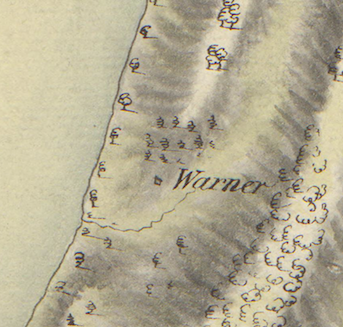 The above snippet shows the house just north of a stream feeding into the Hudson.  A rarely seen property map from 1837 gives the area in greater detail.

The slider on the top right adjusts opacity and you should be able to zoom in.

The southern edge of this property borders on the property that is depicted in my previous post (the map with the Henry Atherton estate house that is currently for sale).  The southwest corner of this map fits like a puzzle piece into the northwest corner of that map.  This map is dated 1837 and includes the following label:

The notch of land on the southwest corner gets its shape from a stream.  I believe this is the same stream that is visible in the map from the Revolution.  A little bit to the north you will see a “Dock” and three “dwelling houses.”  One of these is the house that J.B. James is referring to and they indeed belonged to the Warners.  This land is currently on the grounds of the Hebrew Home.  Interestingly, one of those houses seems to have a similar footprint to an existing building.  It would be interesting to see if photos from the days of the Colored Orphan Asylum could be found to reveal what these old houses looked like.

The property map reveals some other interesting things.  Any local maps from this period (1st half of the 19th century) are very rare.  To my knowledge, there were no commercially published maps of the area in this time.  You can see that there is a bit of land that juts out into the Hudson today in exact same spot where the dock was located. You can also see that part of Palisades Avenue was indeed a very old road.  You can also see the “quarry” labeled on the map where the Skyview apartments are today.  I found the will of John Warner and he was convinced that this quarry was going to yield a fortune.

I am trying to put these property maps together to make a composite map of Riverdale for this time period but it is loading very slowly.  I put the Atherton map and the Warner map together here if you are interested and patient enough for it to load.