Another old house that J.B. James refers to in his memoir is the “Samler House.” In 1935 he wrote:

Another old timer was the [S]amler house, at the junction of Albany Post Road with Broadway at about 254th St. The house was in the old Dutch style, with a long sloping roof covering the porch. A grape arbor, with a brick path ran from the house to the road. The grounds were 17 acres of hilly, picturesque land, and a row of fine old cherry trees stood along the road front. Many a feast I have had on their fruit. The farm had several large shag-back hickory nut trees, a great rarity now. These nuts are the finest flavored of any nut that grows. The trees were cut down for firewood before we left Riverdale. The old house still stands, but was moved westward about one block and fitted with modern improvements.

I have seen references to this house before.  The Reverend Tieck mentioned it only briefly on p. 154 of Riverdale, Kingsbridge, Spuyten Duyvil:

About 350 feet north by west of the point where the Henry Hudson Parkway crosses Broadway stands a very old white frame dwelling, the Samler house, now slightly west of its original location.

So the house was still there W. 254th Street and Post Road when Tieck was writing–in 1968.

There are photos of the house at the NYPL and the New York Heritage site. This one was taken in 1924. 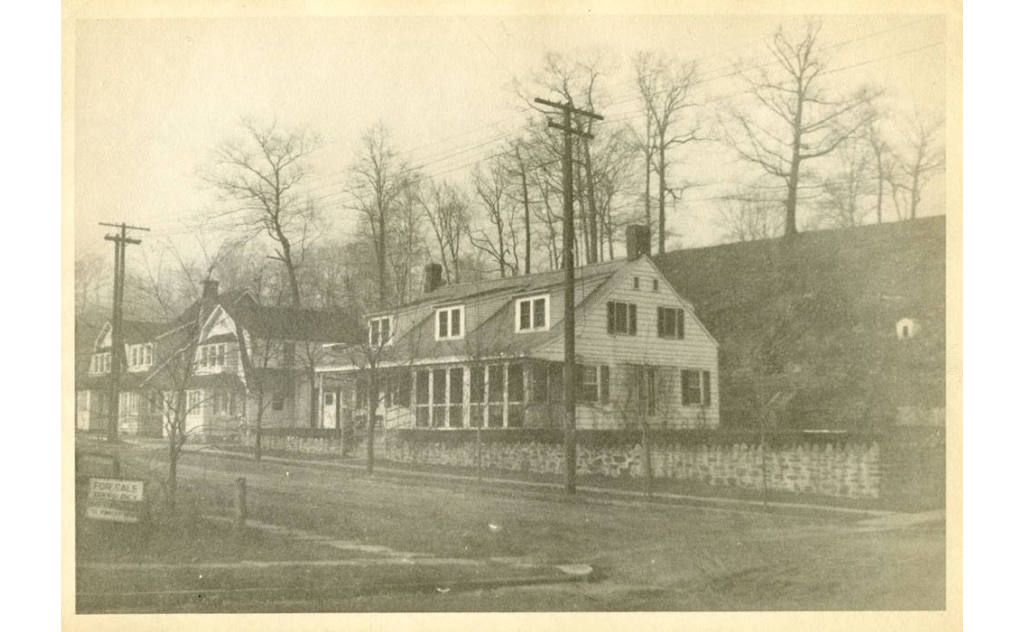 It does have the classic look of an old NY Dutch farmhouse from the colonial period.  This is that same view today. 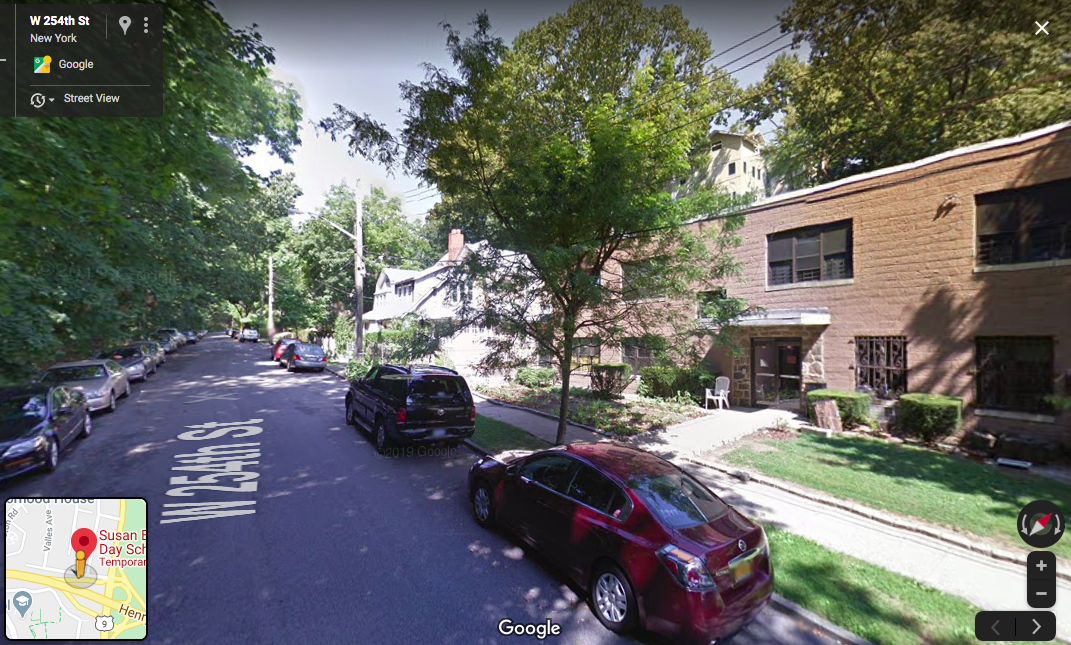 There is a charmless looking concrete box on the site now but the same single family homes can be seen in the distance.  I found out that this concrete building was built in 1978 to house the “Fielday” preschool:

Both James and Tieck referred to the Samler House as “old” and state that it had been moved but offered no dates.  I got curious about the history of the building.  This very cool 1907 map of Riverdale shows the house on a plot shaded pink and labeled “Mary Semler.”  This is before it was moved–fronting on the Albany Post Road–not far from J.B. James own house to the east and it shows the Samler farm as being 17.5 acres. 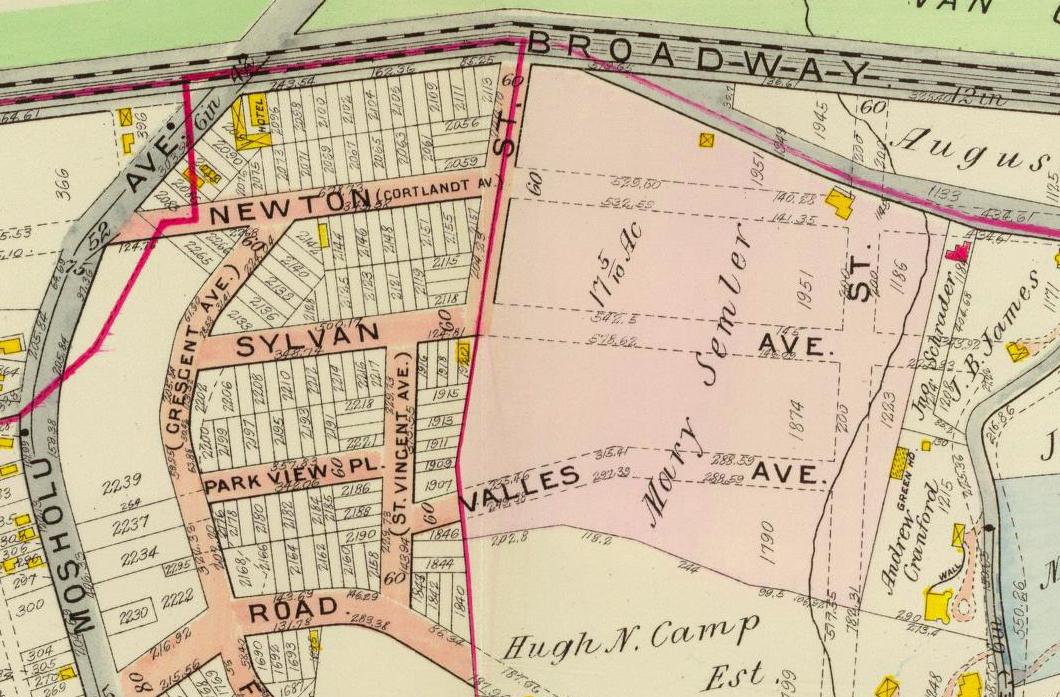 The property was sold not long after that map was made.  The below map (estate sale map of the Samler farm) shows where the house was in yellow and where it was moved to (marked with a blue asterisk). 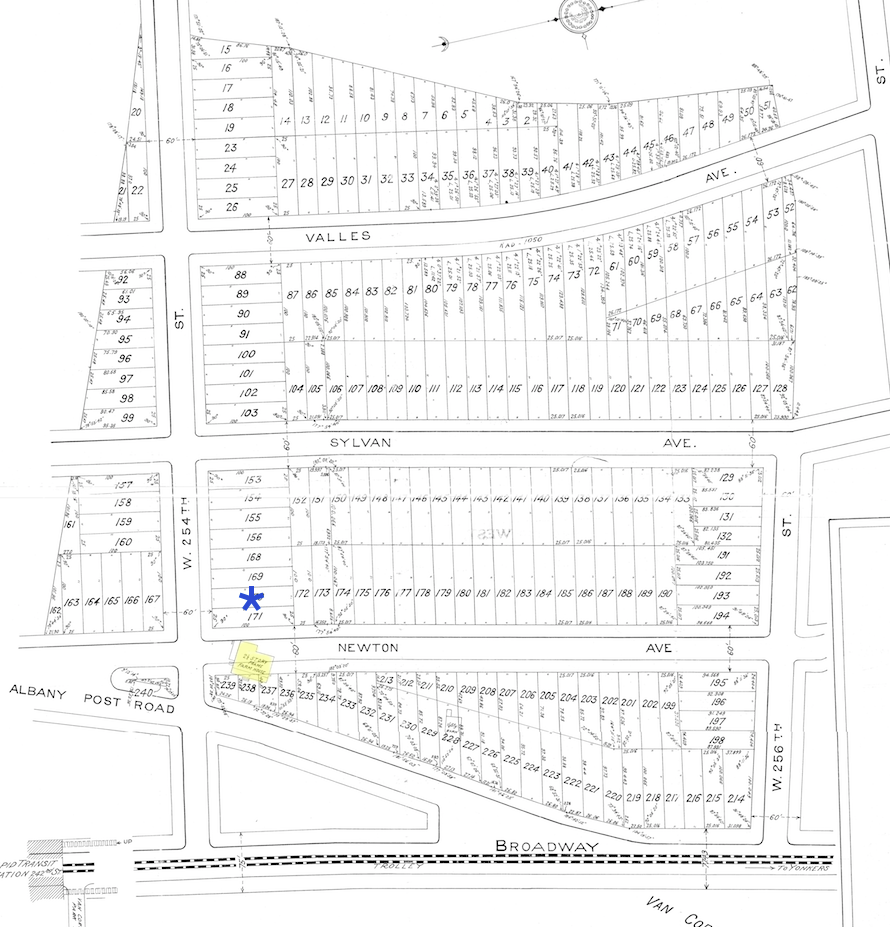 So the house was not moved very far at all.  Who was Mary Samler?  Googling around reveals that she was the daughter of George Washington Hadley, which explains a lot.  The Hadley family’s connection to this neighborhood predates the Van Cortlandt’s presence here.  In fact, the Van Cortlandt House probably sits on land that previously belonged to the Hadleys.  Digging into Mary Samler’s ancestry a little I found that she was a descendant of many of the local colonial era families (Tippett, Betts, Warner, etc).  So it at least seems to offer the possibility that the house was indeed “old” as J.B. James and Rev. Tieck suggested.

Cross Checking the location of the house on an earlier map indicates that the Samler house was just north of a stream that fed into Turtle Brook (an old stream that crossed the parade ground of Van Cortlandt Park): 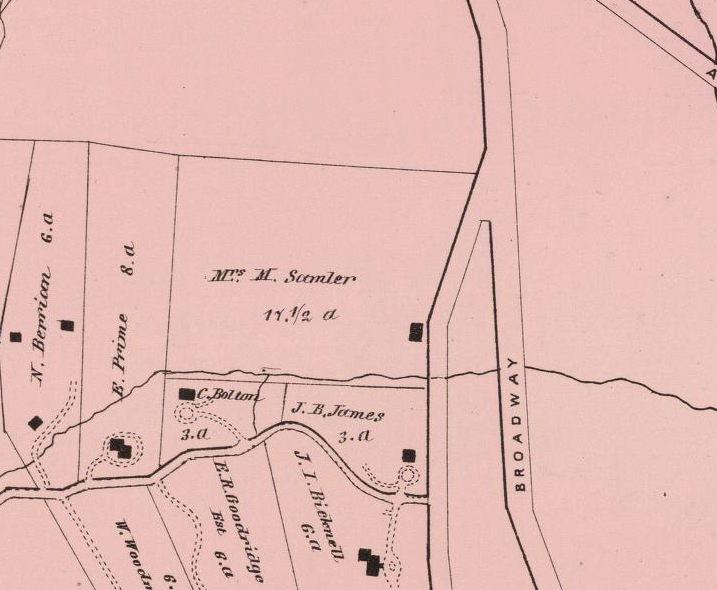 Now check out a zoomed out view of the same location on this 1781 British Intelligence Map: 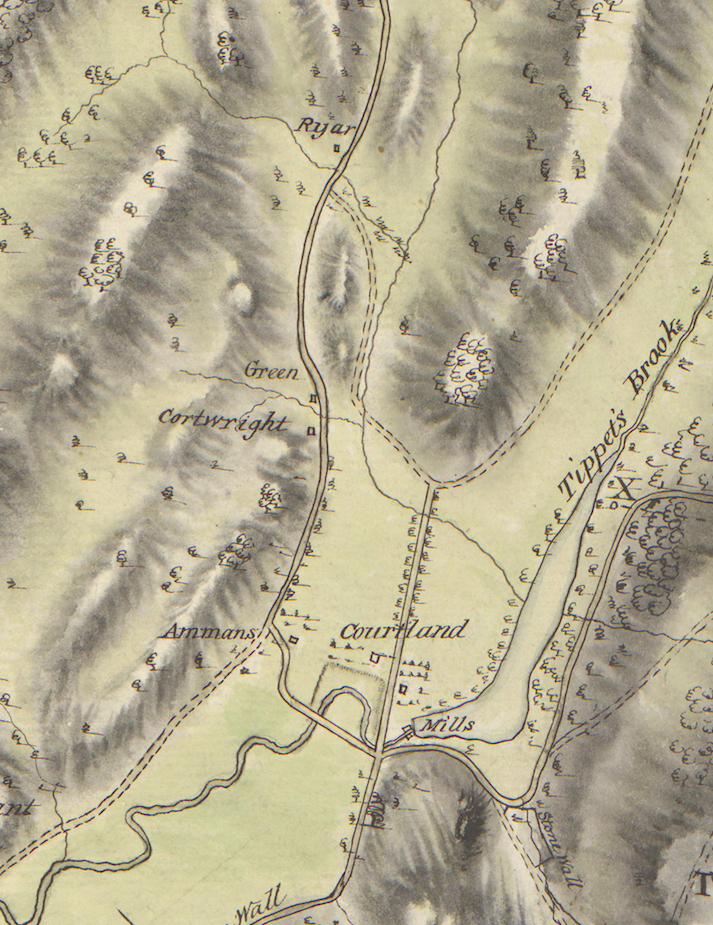 If this is the same house, who was “Ryar?”  This part of Riverdale from 1693 until the Revolution was part of Philipsburg Manor.  In 1693, the land was granted in a royal proclamation to Frederick Philipse, who became “Lord” of the manor. During the Revolution Frederick Philipse III, who was the Lord of the manor at that time, paid a large price for his loyalty to King George IIII.  His lands were forfeited to the new American government and they were sold by the Commissioners of Forfeiture in 1785-1786.  Before then, the manor was divided up and farmed by tenants, who paid annual rent to Philipse.  Ryer was one of those tenants.  The Westchester County Archives has the records of the sales that occurred under the Commissioners of Forfeiture and this is the relevant one: 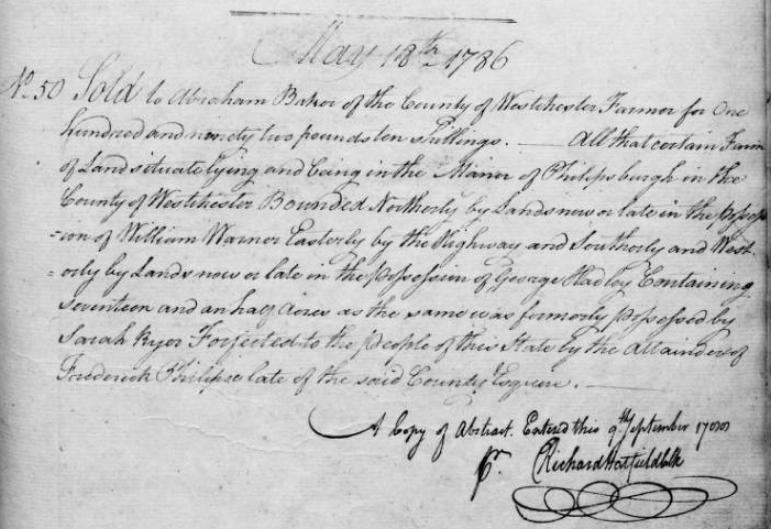 It reads: “No. 50 Sold to Abraham Baker of the County of Westchester Farmer for One hundred and ninety two pounds ten shillings. All that certain Farm of Land situate lying and being in the Manor of Philipsburgh in the County of Westchester Bounded Northerly by Lands now or late in the possession of William Warner Easterly by the Highway and Southerly and Westerly by Lands now or late in the possession of George Hadley Containing seventeen and a half Acres as the same was formerly possessed by Sarah Ryer Forfeited to the people of this State by the Attainder of Frederick Philipse late of the said County Esquire.”

Note that the acreage of the farm is the same as it was in the 20th century–17.5 acres.  Other than the above document it is difficult to figure out what members of the Ryers family were living there before the Revolution.  They were a Dutch family, which means that had different naming conventions and their ancestry is confusing–but it explains the Dutch colonial architecture of the Samler House.

I could not figure out when the Samler House was torn down but it had to be before 1978 when the Fielday School building was built.  I found a reference to the address, 225 W. 254th Street, in this 1963 blurb but other than that, nothing in the Riverdale Press: 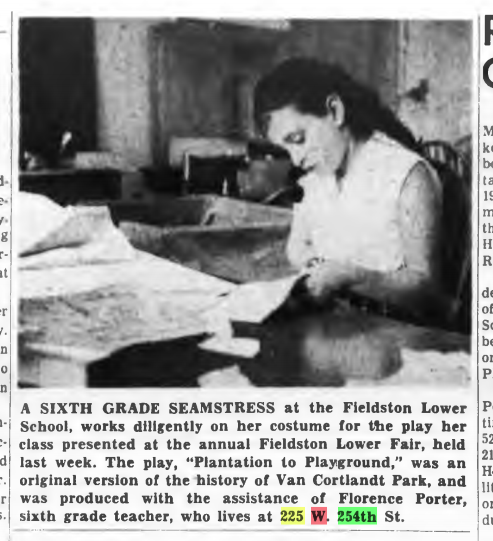 I find the idea of this teacher, Florence Porter, living in a local historic house and teaching local history fascinating.  I wonder if she knew the history of the home that she lived in.

I also wonder if the house was torn down, burned down, or what.  If local historians were vaguely aware of its history, I wonder if anyone opposed its destruction. 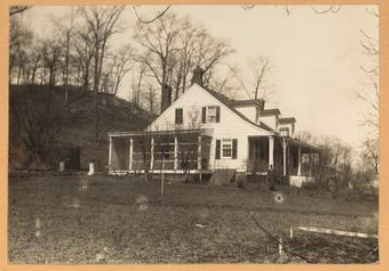