Below is the survey report issued by USDA soil scientists that visited the burial ground site to scan the area using ground penetrating radar.  It states that “3 different sites in the proximity of the existing cemetery showed multiple locations of potential anthropogenic disturbance.”  But it is careful to note that “it does not provide enough information to differentiate the origin of the disturbed material.”  Interestingly, a [pedestrian] path directly to the south of the fenced-in portion of the burial ground “provided the best-defined linear features of the entire study . . . In this site . . . it is possible to observe 5 well defined linear features.”

The below photos were taken by Nick Dembowski in 2018.  They show several headstones that were removed from the Kingsbridge Burial Grounds in the 1980s.  Between the 1980s and 2018, the headstones were kept behind a fence on the grounds of the Van Cortlandt House Museum.  In 2018, the fence was removed.  At that point the headstones were left among construction debris by the east side of the Van Cortlandt House Museum, where they remain to this day. 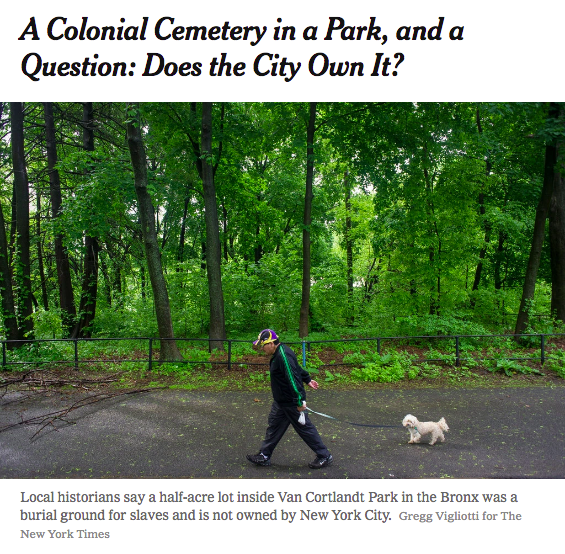 Patrick Raftery, author and librarian at the Westchester County Historical Society, drew this map of the Kingsbridge Burial Grounds that he based on measurements in the colonial-era deeds (see items 1 and 2 in this document list).  The map was published in Raftery’s 2016 book, The Cemeteries of The Bronx, which includes a history of the Kingsbridge Burial Grounds.  Site A is his estimation of the historical boundaries.  Site B is the fenced in portion of the burial grounds.  Site C is the golf center. 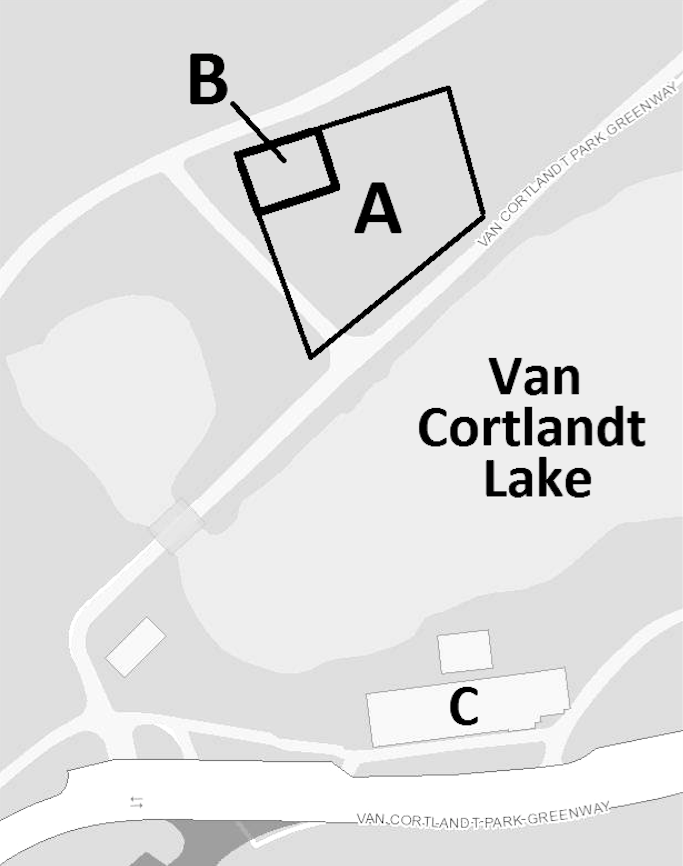 A team from the Kingsbridge Historical Society, with NYC Parks permission, surveyed the fenced-in area of the Kingsbridge Burial Grounds to determine the placement of headstones.  By this time, the larger headstones had already been removed by NYC Parks and placed behind a fence on the grounds of the Van Cortlandt House Museum. 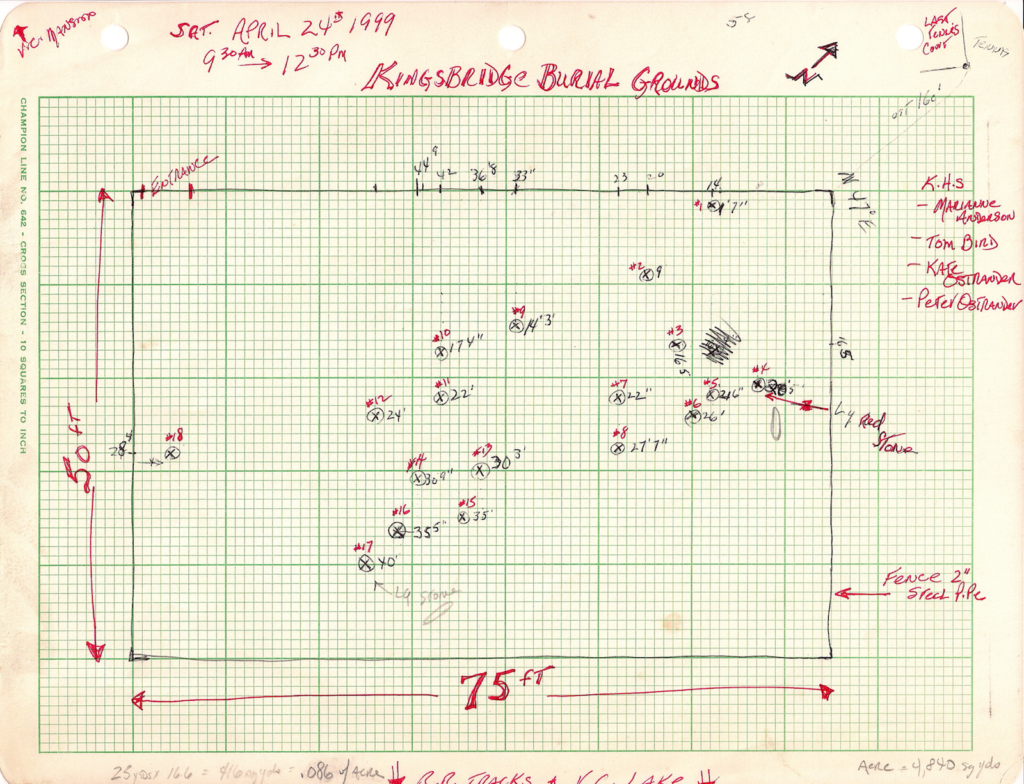 The headstones of Samuel Berrian and Dorcas Berrian are in the foreground. 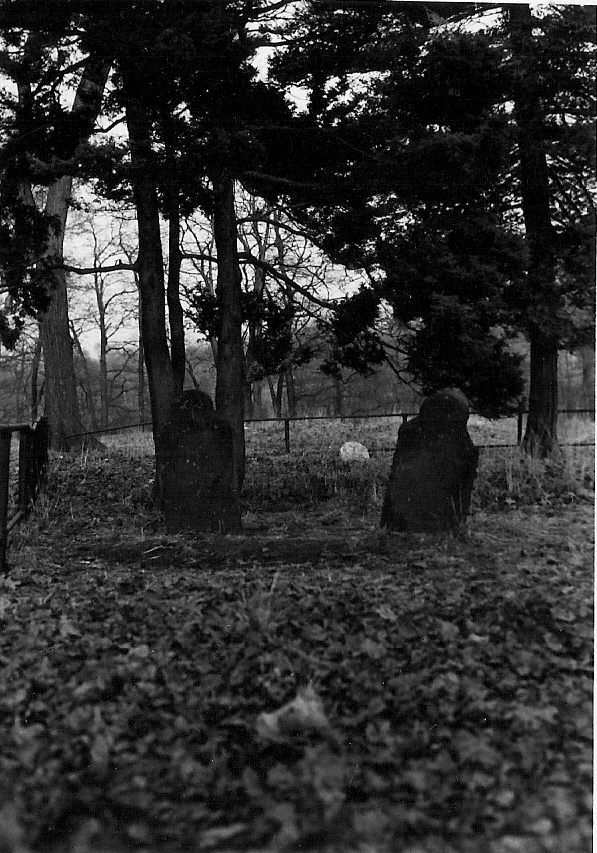 This selection is from a series of articles written by J.B. James as an older man.  He grew up close to Van Cortlandt Park and spent much of his youth around the lake.  He was 19 years old in 1878.

About 1878, the New York, Boston and Montreal Railroad was begun, running north from Highbridge through the Van Cortlandt Estate, with a station at the present location in the Park.  In cutting through the bank on the north side of the lake a great number of skeletons of former slaves of the Estate were unearthed.  This slave burial place was unknown to most of the residents.  The road met with financial difficulties and was abandoned for a while.  It was finally taken over by the New York Central, and the branch from Van Cortlandt to Yonkers constructed, which made connection with the elevated road at 155th St. 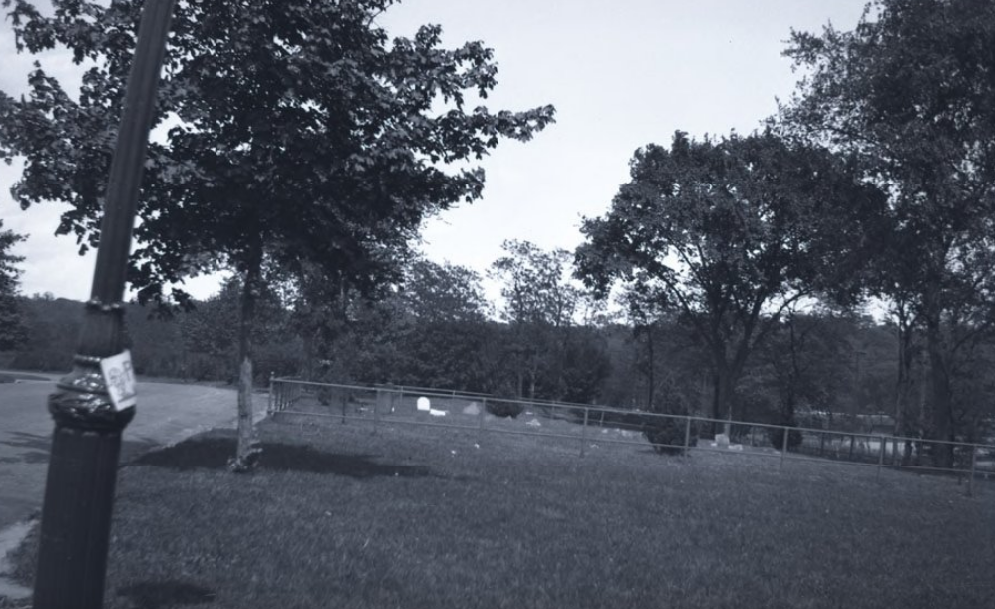 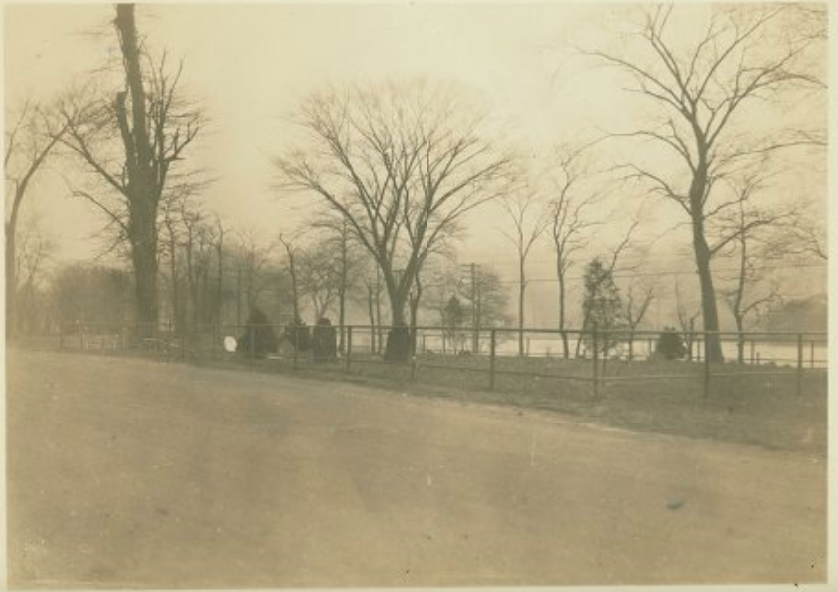 Jenkins’ description helps to explain some of the destruction to the burial area.

In the southeast corner of the field, not far from the lake, is a group of several locust trees.  This spot is supposed to have been the site of Van der Donck’s farmhouse, if he had any, and was the site of the house of the original Van Cortlandt.  In grading the surface of the field here in the spring of 1903, the foundations of the old house were uncovered and also numerous pieces of broken Dutch pottery–jugs, wine bottles, and the like.  The site is between the dam and the group of trees, about one hundred and fifty feet from the former.  The spot has been used as a graveyard for many years, and here are buried several members of the Ackerman and Berrien families, descendants of Betts and Tippett and connections of the Van Cortlandts.  Upon a visit made to the spot by the author in the fall of 1902, he found the tombstones much defaced, with many fresh wounds, made apparently within a few days before his visit. That very week one of the cavalry squadrons or batteries of artillery had camped here in the park, and the signs were unmistakable that their stable tent had occupied this spot, or that they had used the trees and tombstones for tethering their horses, and had either carelessly or wontonly injured the monuments.  Some of these stones have dates before 1800.  The spot has since been fenced in for protection from such vandalism and desecration.

The below excerpt from Randall Comfort’s history is the only document referencing headstones in the area where enslaved people were buried.

Closely adjoining the first Van Cortlandt house built in 1700 and destroyed in 1825, as we have seen, was an old burying ground.  It is due north of the very lower portion of Van Cortlandt Lake.  Small though it be, it is the last resting place of many of our best known families, including the prominent Berrians.  To the east is a second collection of tombstones, where the negro slaves were interred.  It is said that negroes were always interred in “the back yard of a cemetery.”  The cutting through of the Putnam Branch of the New York Central Railroad has sadly interfered with this little graveyard, as have also other subsequent improvements.

The below article appeared without a byline. 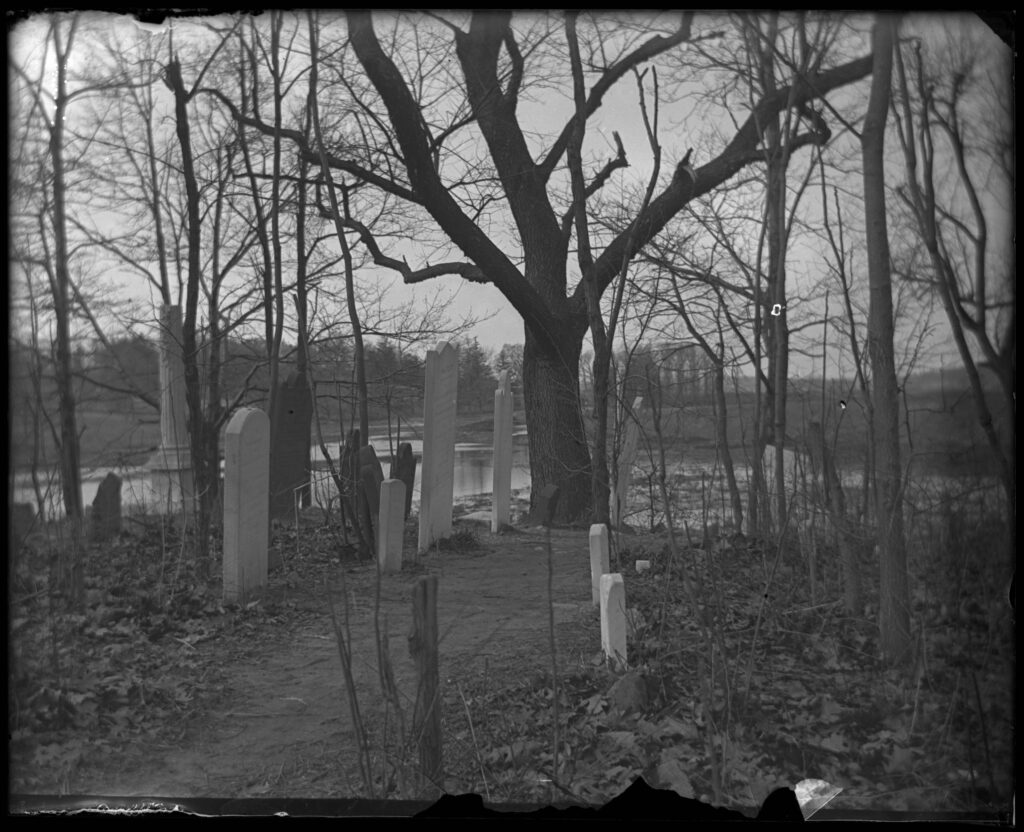 The author of the article below, Thomas Henry Edsall, was a local historian, who wrote History of the Town of Kings Bridge.

Among my notes, I find the following transcripts of inscriptions on old grave stones, taken in April, 1881, in an ancient and long disused burial place on the Van Cortlandt estate, near the station of that name on the N.Y. City & Northern R.R.  I believe this to have been the family burying ground of the families of Betts and Tippett when they owned and occupied the land of which the estate is a part, in the 17th century.  The old Van Cortlandt mansion stood about one hundred yards from it until it was torn down about seventy years ago.

On a brown sand stone slab, standing: “In memory of William Ackerman . . .”

This excerpt was written by Thomas Henry Edsall, a local resident and historian, who wrote History of the Town of Kings Bridge.

Berrian–Bashford.–Bordering on the lake and running back to the lane which leads up past the old saw mill to the residence of Mr. Augustus Van Cortlandt, is a plot of several acres, used as a colt-pasture.  At the end toward the lane, where now is a grove of old locusts, there was yet standing about sixty years ago the house of Jacobus Van Cortlandt, who bought its site (and perhaps the old house) in 1699.  At the other end, overlooking the lake, is an ancient burial-place.  Most of the graves were marked by field-stones only, with no inscriptions, except sometimes the initial of the deceased. Of several inscribed headstones standing a few years ago, but two remain in place. The New York City & Northern Railroad was cut through one end of the plot, where tradition says the negroes were buried.

Appearing under the title “Railroad Matters,” the following short article appeared in newspapers around Westchester County.  The article refers to The New York and Northern Railroad Company, which owned the railway that became the Putnam trail in today’s Van Cortlandt Park.  Caleb Van Tassel was the miller at the Van Cortlandt Mills. 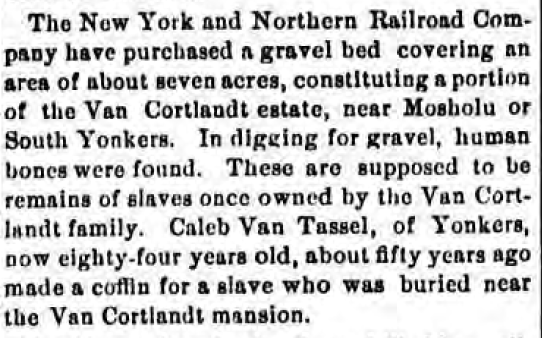 The above article is noteworthy for a couple of reasons.  First, it refers to a seven acre plot of land purchased by the railroad.  The deed to this purchase has not been found. Also, it states that the skeletal remains were found while “digging for gravel,” as opposed to cutting through the bank of the lake to lay tracks.

The below map shows the completed New York and Boston Railroad traversing the Van Cortlandt estate.  This railroad underwent many ownership changes but would eventually become the Putnam line of the New York Central Railroad.  Today it is the Putnam trail. 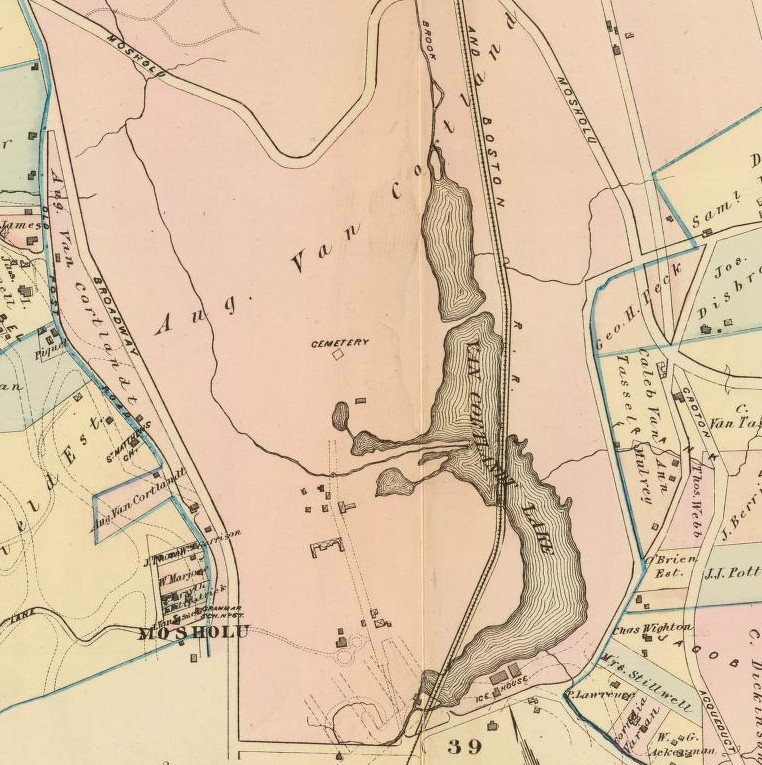 The below article indicates that the southern portion of the New York, Boston and Montreal Railway was completed by 1875 and the first train was run from High Bridge to North Yonkers.  While this article does not mention the burial grounds, other sources indicate the railroad’s construction caused damage to the burial grounds. 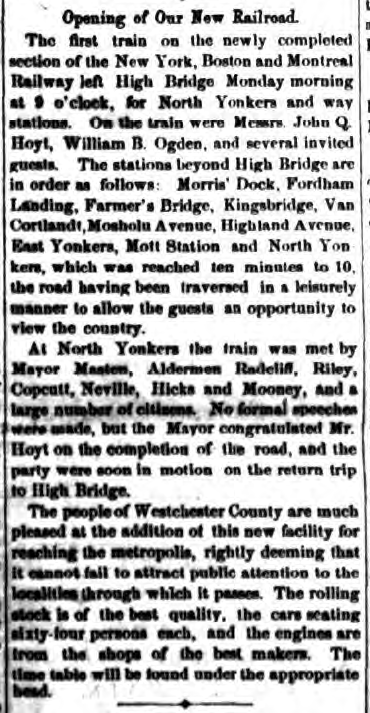 This deed represents the final transfer of the Tippett family lands around today’s Van Cortlandt Lake to the Van Cortlandt family.  However, the deed exempts 1/2 acre of land from the transaction to be used as a cemetery by George Tippett III “and his heirs.”  It was described as beginning at a stake in the southwestern corner of the cemetery, and from there running 165 feet southeast to the edge of the mill pond (today’s Van Cortlandt Lake).  It ran northwest along the bank of the mill pond about 165 feet to a marked black oak tree.  From the tree the boundary continued west about 116 feet to a stake in the ground.  The western boundary of the cemetery ran from the first stake to the second stake.  Rights of egress and regress over Van Cortlandt land were guaranteed to Tippett and his descendants in order to visit the cemetery without trespassing.

…George Teppet & Dorcas his wife have granted… unto the said Jacobus van Cortlandt… All that certain messuage or tenament & home lott whereon he ye said George Teppet now lives situate & being at ye Yonkers, aforsd. containing fourty four acres… except & always reserved out of this present grant & release unto the said George Teppet his heirs and assigns one half acre of ground part of ye home lott aforementioned which hath heretofore been & still is for the use of a Ceimtery or  or burying place & is staked out as follows: BEGINNING at a stake at ye southwesternmost corner of ye said burying place & so running south eastwardly ten rods to a stake by ye edge of the Mill pond & then northwardly by the mill pond to a black oak tree marked being in a straight line about 10 rods & ten westwardly about seven rods to a stake & from thence about eleven rods to ye first mentioned stake where it began together with free egres & regress to & from the same.

This document is the earliest reference to a burial ground in this area.  It declares 1/4 acre of land to be used by the Tippett and Betts families as a burial ground “forever.”

KNOW ALL PERSONS TO WHOM THESE PRESENTS SHALL COME, GEORGE TIPPETT of ye Younkers in ye County of Westchester, SENDS GREETING,  WHEREAS there is a peice of land & part of ye home lott whereon ye sd. George Tippet now lives at ye Younkers, containing one quarter of an acre of land wch. has been used for a Burying place for a greet many years last past by ye two families of ye Betts & Tippets &  WHEREAS Abigail Betts widow of Joseph Betts & ye Guardians of ye children of Samuel Betts deceased have allowed some consideration therefor in ye division of ye lands called ye Younkers; The sd. George Tippet doth hereby grant & confirm ye sd., quarter of an acre of land for ye use aforsd., unto ye sd., family of ye Bett’s as well as to ye sd., family of ye Tippets to remaine for a Burying place for their use forever.  IN WITNESS THEREOF  ye sd. George Tippet hath hereunto put his hand & seal this 22d day of June Anno Dom. 1717.

Sealed & delivered in ye presence of,