The following appeared in a local paper called The Riverdale News and was published in April and May of 1935. It was written by J.B. James, who was born in 1859 and grew up in what is now Riverdale (then Yonkers). Photos added by Nick Dembowski, who transcribed and annotated the memoir. 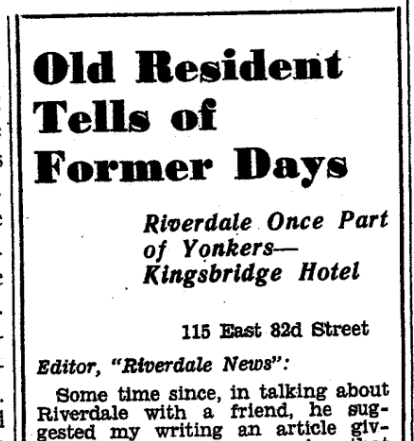 Riverdale Once Part of Yonkers–Kingsbridge Hotel

Some time since, in talking about Riverdale with a friend, he suggested my writing an article giving my reminiscence, saying that he would enjoy hearing something of the early history, and that subscribers to the NEWS would also. The idea appealed to me, as I felt that I could relate some interesting incidents previous to the development of Fieldstone and the coming of the present residents elsewhere in the neighborhood. The result is this sketch. There may be a few persons, now living, who can remember the events related here, but they are few–indeed most of my contemporaries, old schoolmates, have passed on, others have removed to distant parts. As a resident for some forty years I have seen many changes and witnessed many events I have here chronicled. I trust they may hold the attention of your readers.

When we moved to Riverdale from the city, I was about seven years old [Note: about 1866]. Riverdale then was a part of the town of Yonkers, Westchester County, and was composed exclusively of country residences and large estates, the two largest being the Delafield Estate, extending from the Old Albany Post Road, westward to the Hudson River, and the Van Cortlandt Estate, of some 950 acres, now embraced in Van Cortlandt Park. This section was real country, having none of the modern improvements and conveniences, and having many game birds and animals. Quail whistled in Van Cortlandt Park during the summer season, woodcock were to be found in the swamps north of the lake, and an occasional coon was taken in the woods, while the tongue of the beagle could be frequently heard in “Cortlandt Woods”–this, however, in a later date–in the 1880’s. Some small flocks of wild pigeon passed over in the early autumn, leaving a few strays for the enterprising young gunners, while on year, during a great forest fire in Canada, they flew over in large flocks. Doctor Varien [Varian] of Kingsbridge was an ardent sportsman and managed to get his share of the pigeons, as well as woodcock, quail and wild duck in the lake, in their autumn migration.

To the south was Kingsbridge Creek, really the northern part of the Harlem River, producing find oysters and various kinds of pan fish–perch, snappers, Lafayettes and striped bass. Also clams and crabs. This part of the Harlem has been obliterated by filling in, and a new channel made further to the south, by the Ship Canal. The oysters were renowned, and the old Kingsbridge Hotel, now razed, was noted for its oyster suppers. Many a mess of pan fish I caught in this creek and also in the Hudson River, fishing from the southwest corner of Riverdale dock. While fishing from the latter place I frequently observed schools of porpoise and semi-occasionally a sturgeon jumping clear out of the water, falling back with the resounding splash. Both these fish disappeared many years before I left this location, some twenty-five years ago.

My first experience as a young fisherman was in the waters of Van Cortlandt Lake, then much more attractive to the eye than at present, as the old grist and saw mills were standing, and near them on the dam were several huge elms; on the north bank large oaks, offering shade on a hot summer day and making a most beautiful picture. Here one could sit on a large boulder, with the eye delighted by the scenery, and the sense of small by the odor of water lillies. The lake then was the property of the Van Cortlandt Estate, but every one had free access to it, as the owners were very liberal and employed no means to prevent trespassing. It abounded in sunfish, bream, bullheads and small stream pickerel. In the spring suckers were plentiful, but could only be taken with a snare made of soft light brass wire attached to a short rod, the running noose being slipped over the fishes head and jerked taut. Sometimes the jerk was too quick and strong, cutting the socker almost in two.

Here, when too young to be allowed to go alone, I would be taken by my mother, who kept an eye on me when I fished to see that I did not fall into the water. Very soon, however, I was allowed to go in company with a schoolmate or so, and sometimes our lady teacher would organize a party, making attendance the prize for diligence in our studies. Our fishing outfit consisted of a white birch sapling rod, string line but a real barbed hook–no ben pin for us! The fish we caught were rather undersize, but what of it? They were fish, to be taken home and cooked, much to the disgust of the cook. Later I learned to clear the catch myself. I will remember with what delight I received one Christmas a real jointed fly rod, and on the following May caught a fine trout at the Sheep Barn Bridge, over Tibbetts Brook, a feeder of the lake. This brook had trout in it, but was very difficult to fish on account of thick underbrush. Occasionally a trout would be caught in the stream that ran past the old stone farm house, now covered by the Parade Ground [This is a different house than the Van Cortlandt Mansion and was located on today’s Parade Ground close to Vault Hill]. A few were also taken in the mill race, which emptied into Mosholu Creek, now filled in. But the favorite fishing place was at the lower end of Van Cortlandt Lake, particularly on a warm day in late spring, where one could appreciate the picturesque surroundings, then much more appealing than at present, the air filled with the songs of birds and the fascinating creak of the wooden machinery of the old mill grinding the farmer’s grist, and the splash of water tumbling over the huge overstock water wheel. Alas! The old grist and saw mills were struck and destroyed by lightning many years since, only a few stones of their foundation remaining to mark where they stood, and only those persons familiar with the site can locate it.