The following article appeared in the June 1935 issue of the Riverdale News as a continuation of the memoir of 19th century resident, J.B. James.

Photos added by Nick Dembowski, who transcribed the memoir.  Some of the old houses he refers to here are further explained here.

(The author of these interesting articles spent Sunday visiting one of the editorial staff of the NEWS recently and told stories of early days in our community. We are glad to report that we have several of these article to print…Editor.)

The section comprised in Riverdale was formerly a part of the Warner and Hadley farms. In 1843 William G. Ackerman purchased about 100 acres of this property and sold a large part of it to an association composed of Judge W.W. Woodworth, Henry L. Atherton, Samuel D. Babcock and C.W. Forster, who built houses for themselves and sold plottage to others. Judge Woodworth lived in the old Philips Manor House at Yonkers, but whether before or after the Riverdale purchase I am not certain, but believe it was before. Atherton and Babcock resided in Riverdale until their deaths. The Ackerman farm house is supposed to have been that owned for many years by Colonel Stone. It stood on the bank above the railroad station, with a broad lawn in front. It was destroyed by fire and the site afterward sold to Darwin P. Kingsley, who built a fine mansion upon it, to be also burned.

There was also a very old farm house on the extreme southwest corner of the land, now the grounds of the Colored Orphan Asylum, which was run for many years by a Mr. Whitney as a boarding house. This was also destroyed. It may have been the original Ackerman house, but I think it was the old Warner house.  Its architecture was of an older period than the Col. Stone house.  The property on which it stood was vacant for many years and then sold to a Mr. Johnson, who erected a fine stone mansion, to be also destroyed by fire. The property then passed into possession of the Colored Orphan Asylum.

In 1856, Henry F. Spaulding and others laid out what was called “Riverdale Park.” This extended westward from Riverdale Ave. to the bank of the Hudson River. Several mansions were built upon it, and it was restricted. At that time, the owners and residents were Thompson N. Hollister, Henry F. Spaulding and C.W. Forster, whose holdings are now embraced in the Perkins Estate; John Mott and Percy R. Pyne. A tide-water pond, now filled in, was inside of the tracks of the railroad, and was overlooked by a high terrace and level land beyond, planted with shrubs and containing many fine trees. The private ownership of the park was indicated by two gates closed periodically to legally conserve it. One of these was on Riverdale Avenue, a short distance north of the Presbyterian Church, and the other at the southerly intersection of 251st St. and Palisade Ave. The dock at Riverdale station was originally much smaller than at present and was enlarged to accommodate the increasing number of carriages. It was strictly private, being owned jointly by the owners of the upland adjoining. No passenger boats were allowed to land.

Other real estate enterprises were the Hudson Park property at Spuyten Duyvil, and the Oloff Park property on the heights of East Kingsbridge, adjoining the southern end of Van Cortlandt Park. Hudson Park was laid out in 1835 on a part of the Samuel Thompson tract. It contained some thirty acres, but was not a financial success, only one house being erected on the river section, and this was destroyed by fire. The east end was divided into small plots and built upon, and became known as Cooperstown, near the Spuyten Duyvil Parkway. Most of the land is now the estate of the late James Douglas.

In 1869, W.N. Woodworth purchased from the Van Cortlandts about 100 acres on the high ground to the east of Kingsbridge, and laid out Oloff Park, named for a member of that family. Streets were laid out, and a number of plots sold, but no houses built.

The second oldest house in this section was a small stone farm house, built by William Hadley some time after 1761. It was on the west side of the Albany Post Road, a short distance north of a large apartment house erected in recent times on Broadway. It has been added to and remodeled, but the original house is still extant.

Another old house was that known as “Upper Cortlandt,” built about 1822. It was built of native stone and stood in large grounds, with a beautiful lawn extending up to Riverdale Avenue. It was afterwards owned by the late Waldo Hutchins. The property was sold many years since, and cut up into lots which are now built upon. The house itself is now owned by a Catholic institution.

Another old time was the [S]amler house, at the junction of Albany Post Road, with Broadway at about 254th St. The house was in the old Dutch style, with a long sloping roof covering the porch. A grape arbor, with a brick path, ran from house to road. The grounds were about 17 acres of hilly, picturesque land, and a row of fine old cherry trees stood along the road front. Many a feast I have had on their fruit. The farm had several large shag-back hickory nut trees, a great rarity now. These nuts are the finest flavored of any nut that grows. The trees were cut down for firewood before we left Riverdale. The old house still stands, but was moved westward about one block and fitted with modern improvements.

At Spuyten Duyvil, the oldest house was that formerly belonging to the Berrien family, now the Isaac G. Johnson Estate. I recall also to old Schermerhorn house on the south side of Mosholu Avenue, near Broadway. This disappeared many years ago. It was occupied for a time by a family named Burke, and then stood vacant until its destruction. It had the reputation of being haunted, from the following circumstance. Sometimes at dusk or in the evening a light was observed dimly shining through the cracks of the closed shutters, while peculiar musical sounds were heard. Persons in the neighborhood were afraid to go near it, believing they were produced by a ghostly visitant. At last one young man, bolder than the others, sneaked up to a window and peering through the cracks, saw by the light of a candle one of the neighbor’s boys practicing on an old and worn-out piano left behind by a former tenant. The performer, having a taste for music but not the means of gratifying it, took this means of indulging his taste after work hours, getting in through a cellar window. 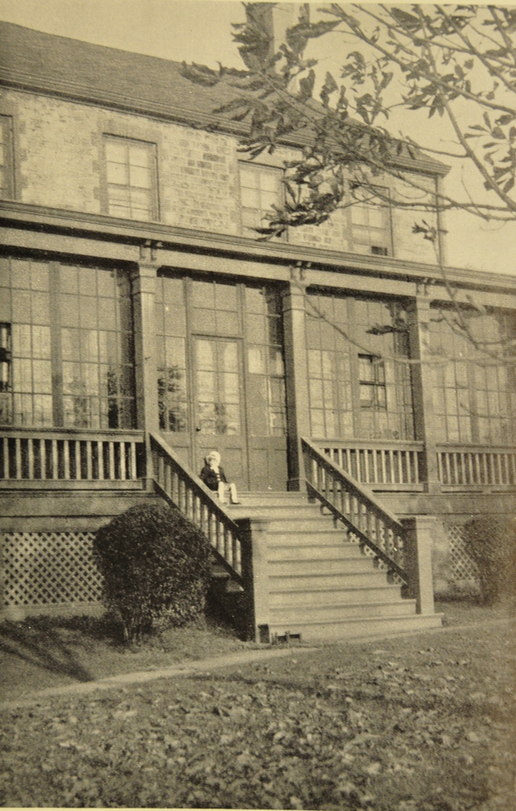 When we came to Riverdale, the only means of transportation to and from the city was by the Hudson River Railroad. The station on the old dock was a small frame building, afterwards enlarged and finally replace by an artistic stone structure. For many years the station master was Joseph Algeo, a small man of irascible temper, who was also telegrapher and postmaster. When he died his place was taken by one of his sons.

The trains ran along the Hudson River, stopping at Spuyten Duyvil, Inwood, Tubby Hook and Carmansville to the terminal at Tenth Ave. and 30th St., a small frame building, very dusty and hot in summer. From this point transportation through the city was by omnibus and horse car.

Traveling on the railroad in those days was no joke, especially in summer, when quantities of dust, smoke and cinders came in through the open windows and passengers were obliged to wear linen or silk dusters to protect their clothing. In winter the cars were cold and filled with coal gas from the stoves. At night, the only illumination was from three or four tallow candles in globes attached to the roof. The cars were braked by hand and connected by the link and pin system, and every time the train stopped or started there was a violent jerk, almost throwing the passengers out of their seats.

When the present line from Spuyten Duyvil to the Grand Central Station was constructed, improvements were made in the coaches, much to the relief of the passengers.

When the present line from Spuyten Duyvil to the Grand Central Station was constructed, improvements were made in the coaches, much to the relief of the passengers.

While on the subject, I am constrained to relate an amusing incident. Just before coming to a station, the brakeman would open the door and call its name. It happened that the brakeman on a certain train had a very rough, husky voice, and on reaching Spuyten Duyvil he called the name in such a manner that several of the passengers laughed. He was angry and shouted, “What do you expect? A fine tenor voice at forty dollars a month?”

About 1878 the New York, Boston and Montreal Railroad was begun, running north from Highbridge, through the Van Cortlandt Estate, with a station at the present location in the Park. In cutting through the bank on the north side of the lake a great number of skeletons of former slaves of the Estate were unearthed. This slave burial place was unknown to most of the residents. The road met with financial difficulties and was abandoned for a while. It was finally taken over by the New York Central, and the branch from Van Cortlandt to Yonkers Constructed, which made connection with the elevated road at 155th St.